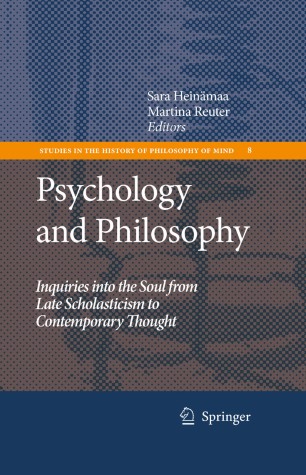 Inquiries Into The Soul From Late Scholasticism To Ontemporary Thought

Part of the Studies In The History of Philosophy of Mind book series (SHPM, volume 8)

Psychology and Philosophy provides a history of the relations between philosophy and the science of psychology from late scholasticism to contemporary discussions. The book covers the development from 16th-century interpretations of Aristotle’s De Anima, through Kantianism and the 19th-century revival of Aristotelianism, up to 20th-century phenomenological and analytic studies of consciousness and the mind.

In this volume historically divergent conceptions of psychology as a science receive special emphasis. The volume illuminates the particular nature of studies of the psyche in the contexts of Aristotelian and Cartesian as well as 19th- and 20th-century science and philosophy. The relations between metaphysics, transcendental philosophy, and natural science are studied in the works of Kant, Brentano, Bergson, Husserl, Merleau-Ponty, Wittgenstein, and Davidson. Accounts of less known philosophers, such as Trendelenburg and Maine de Biran, throw new light on the history of the field. Discussions concerning the connections between moral philosophy and philosophical psychology broaden the volume’s perspective and show new directions for development.

All contributions are based on novel research in their respective fields. The collection provides materials for researchers and graduate students in the fields of philosophy of mind, history of philosophy, and psychology.

Sara Heinänaa is Senior Lecturer of Theoretical Philosophy at the University of Helsinki, Finland. She also works as Professor of Humanist Women’s Studies at the University of Oslo, and officiates as the president of the Nordic Society for Phenomenology. She has published widely on phenomenology and philosophy of mind-body, focusing on the problems of method, embodiment and affectivity. Her latest publications include Toward a Phenomenology of Sexual Difference: Husserl, Merleau-Ponty, Beauvoir (2003), Metaphysics, Facticity and Interpretation (2003), co-edited with Dan Zahavi and Hans Ruin, and Consciousness: From Perception to Reflection (2007), co-edited with Vili Lähteenmäki and Pauliina Remes.

Martina Reuter is Academy Research Fellow at the University of Helsinki and member of the Academy of Finland Centre of Excellence in Philosophical Psychology, Morality and Politics. Among her recent publications are "The Significance of Gendered Metaphors," Nora: Nordic Journal of Women’s Studies 14: 3 (2006); and "Mary Wollstonecraft and Catharine Macaulay on the Will," in J. Broad & K. Green (eds) Virtue, Liberty, and Toleration: Political Ideas of European Women, 1400-1800 (2007).

From the reviews: “For the professional scholar this collection of original essays is a gold mine. This book critically discusses the scientific paradigm of psychology as it developed through two scientific revolutions. There are insights and challenging interpretations of major thinkers in every chapter. For the non-specialist this collection is perhaps also a gold mine. … This is a good, sometimes very technical, academic book. … The audience is primarily scholars in the field.” (Kevin Guilfoy, Metapsychology Online Reviews, Vol. 14 (1), January, 2010)
Buy options