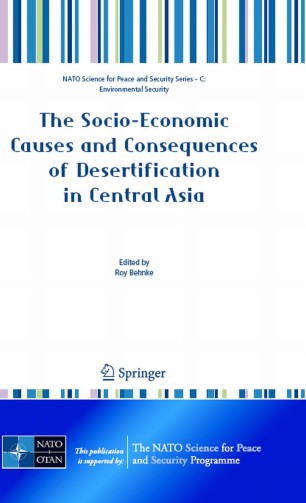 The Socio-Economic Causes and Consequences of Desertification in Central Asia

This book contains a selection of papers presented at the Advanced Research Workshop on ‘The Socio-economic causes and consequences of desertification in Central Asia’ held in Bishkek, Kyrgyzstan, in June 2006. The meeting provided a forum for twenty-six scientists from Central Asia and NATO countries to discuss the human dimensions of the desertifi- tion process. Papers presented to the meeting examined recent scientific evidence on the impact of desertification on livestock production, public health, and biodiversity, and contributed to the formulation of coh- ent national and regional policies for the management of watersheds, rangelands, and irrigated agriculture. The meeting was co-directed by Roy Behnke of the Macaulay Institute, UK, and by Lapas Alibekov of the Samarkand State University, Uzbekistan. Both the workshop and this subsequent publication have been financed by the NATO Scientific Affairs Division and we gratefully acknowledge this support. The Bishkek meeting was ably hosted by the Kyrgyz Sheep Breeders Association under the dir- tion of Akylbek Rakaev who contributed substantially to the successful running of the workshop. Deliberations at the workshop emphasized that policy failures at national level had promoted desertification within the region.