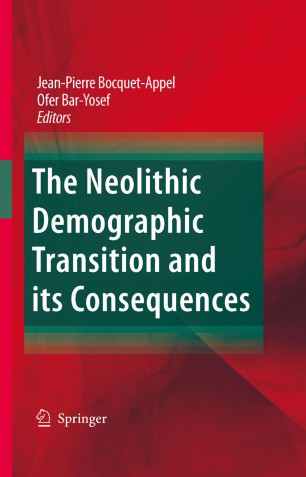 The Neolithic Demographic Transition and its Consequences

Using cemetery data, it has been possible to identify the signature of a previously unknown demographic process associated with the transition from a hunter-gatherer to an agricultural economy.  Characterized by a dramatic increase in the birth rate, and consequently of the population growth rate, over a period of less than a millennium following the transition to agriculture, this global demographic process has been termed the Neolithic Demographic Transition (NDT). The NDT signature has so far been detected in Europe, North America, Mesoamerica and South America.

The methodological innovation which has made possible the identification of the NDT is the use of a relative chronology, fixed to the local onset of the Neolithic. That is, events are considered not in terms of their absolute calendar dates, but rather in terms of their relation to the local date of the transition to agriculture.  This volume presents and discusses the consequences and implications of the NDT on a global scale. Topics include: