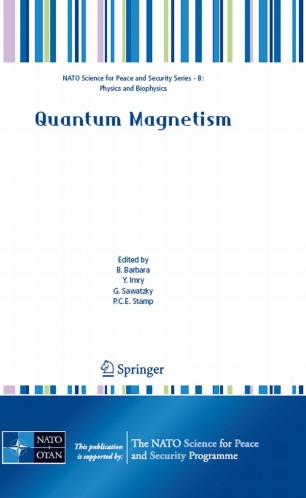 This bookis based on some of the lectures duringthe Paci?c Institute of Theoretical Physics (PITP) summer school on “Quantum Magnetism”, held during June 2006 in Les Houches, in the French Alps. The school was funded jointly by NATO, the CNRS, and PITP, and entirely organized by PITP. Magnetism is a somewhat peculiar research ?eld. It clearly has a quant- mechanical basis – the microscopic exchange interactions arise entirely from the exclusion principle, in conjunction with repulsive interactions between electrons. And yet until recently the vast majority of magnetism researchersand users of m- netic phenomena around the world paid no attention to these quantum-mechanical roots. Thus, e.g., the huge ($400 billion per annum) industry which manufactures hard discs, and other components in the information technology sector, depends entirely on room-temperature properties of magnets – yet at the macroscopic or mesoscopic scales of interest to this industry, room-temperature magnets behave entirely classically.