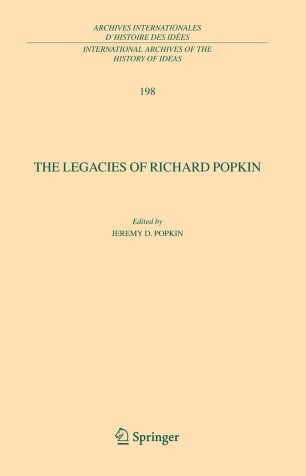 The Legacies of Richard Popkin

Part of the International Archives of the History of Ideas book series (ARCH, volume 198)

Richard H. Popkin (1923-2005) transformed the study of the history of philosophy in the second half of the twentieth century. His History of Scepticism and his many other publications demonstrated the centrality of the problem of skepticism in the development of modern thought, the intimate connections between philosophy and religion, and the importance of contacts between Jewish and Christian thinkers. In this volume, scholars from around the world assess Popkin’s contributions to the many fields in which he was interested. The Legacies of Richard Popkin provides a broad overview of Popkin’s work and demonstrates the connections between the many topics he wrote about. A concluding article, by Popkin’s son Jeremy Popkin, draws on private letters to provide a picture of Popkin’s life and career in his own words, revealing the richness of the documents now accessible to scholars in the Richard Popkin papers at the William Andrews Clark Library in Los Angeles.