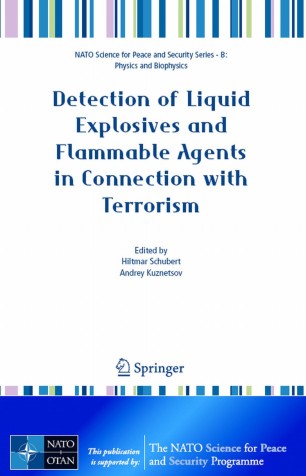 Detection of Liquid Explosives and Flammable Agents in Connection with Terrorism

The organization of an Advanced Research Workshop with the title “Detection and Disposal of Liquid Explosives and Flammable Agents in Connection with Terrorism” was motivated by international findings about activities in this field of application. This ARW followed a meeting about the “Detection of Disposal Improvised Explosives” (St. Petersburg, 2005). Both items show the logistic problems as one of the lessons, terrorists have to overcome. These problems are connected with the illegal supply and transport of explosives and fuels and as counter-measure the detection of these materials. The invention of liquid explosives goes back to the middle of the 19th century and was used for special purposes in the commercial field of application. Because of the high sensitivity of liquid explosives against mechanical shock, caused by adiabatic compression of air-bobbles producing “hot spots” as origin of initiation the commercial application was not very successful. Because of this high risk, liquid explosives are not used in military or commercial application with some exceptions. In the commercial field explosives as slurries or emulsions consisting of suitable salts (Ammoniumnitrate etc.) and water are used to a large extend because of their high insensitivity. In many cases these slurries or emulsions were unfit for terrorist actions, because of their low sensitivity, large critical diameter and using in confinement. In the military field liquid explosives are used in World War I and II as bomb-fillings.