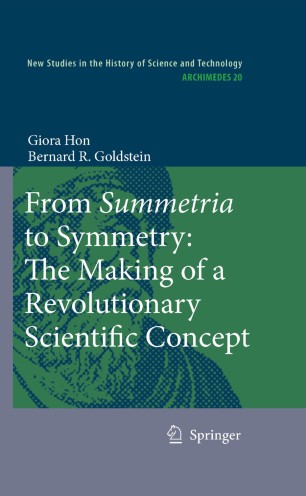 From Summetria to Symmetry: The Making of a Revolutionary Scientific Concept

The concept of symmetry is inherent to modern science, and its evolution has a complex history that richly exemplifies the dynamics of scientific change. This study is based on primary sources, presented in context: the authors examine closely the trajectory of the concept in the mathematical and scientific disciplines as well as its trajectory in art and architecture. The principal goal is to demonstrate that, despite the variety of usages in many different domains, there is a conceptual unity underlying the invocation of symmetry in the period from antiquity to the 1790s which is distinct from the scientific usages of this term that first emerged in France at the end of the 18th century. The key figure in revolutionizing the concept of symmetry is the mathematician, Adrien-Marie Legendre. His achievements in solid geometry (1794) are contrasted with the views of the philosopher, Immanuel Kant, on the directionality of space (1768).