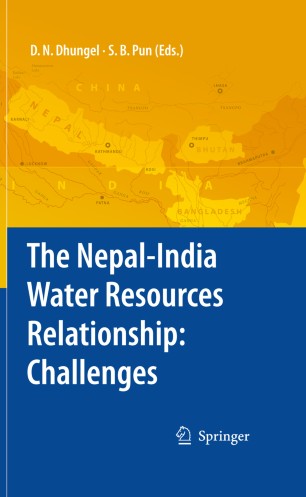 Unless they are torn apart by tectonic action, Nepal and India have to live and engage with each other in many spheres: social, economic and political. Of all the engagements the two countries have to deal with, the issue of water resources is the most important and at the same time a very sensitive issue, because water is the most important natural resource that Nepal possesses, although most of it has yet to be exploited. The size and topography of Nepal are such that the three countries of the Indian sub-continent, Nepal, India and Bangladesh, could benefit immensly, if Nepal's 6,000 rivers are harnessed optimally.

There are both people-to-people and official aspects to the water resources relationship between Nepal and India, the former existing from time immemorial and the latter since at least the time of British India, as set down in a number of treaties.

The 11 chapters that make up this monograph provide a masterly guide to the entire spectrum of water resources relationship between Nepal and India: historical perspective, economic and development issues, flooding, hydropower and energy trading, seaport access via canals and waterways and personal reflections of the power interplay between the countries and an epilogue.

Audience: This book will be of interest to researchers and scientists, professionals and policymakers in water resources management and environmental science, conservation policy and development research.