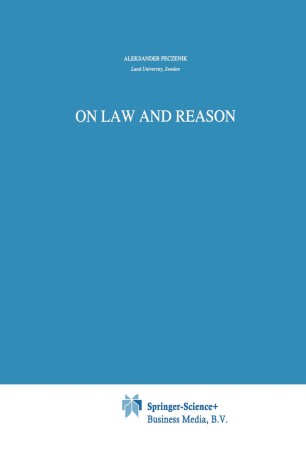 On Law and Reason

'This is an outline of a coherence theory of law. Its basic ideas are: reasonable support and weighing of reasons. All the rest is commentary.’

These words at the beginning of the preface of this book perfectly indicate what On Law and Reason is about. It is a theory about the nature of the law which emphasises the role of reason in the law and which refuses to limit the role of reason to the application of deductive logic.

In 1989, when the first edition of On Law and Reason appeared, this book was ground breaking for several reasons. It provided a rationalistic theory of the law in the language of analytic philosophy and based on a thorough understanding of the results, including technical ones, of analytic philosophy. That was not an obvious combination at the time of the book’s first appearance and still is not. The result is an analytical rigor that is usually associated with positivist theories of the law, combined with a philosophical position that is not natural law in a strict sense, but which shares with it the emphasis on the role of reason in determining what the law is. If only for this rare combination, On Law and Reason still deserves careful study.

On Law and Reason also foreshadowed and influenced a development in the field of Legal Logic that would take place in the nineties of the 20th century, namely the development of non-monotonic (‘defeasible’) logics for the analysis of legal reasoning. In the new Introduction to this second edition, this aspect is explored in some more detail.

"On the morning of September 19, 2005, Aleksander Peczenik died in Lund, Sweden. The community of legal theorists and philosophers of law has lost an outstanding scholar, and those of us who were privileged to count him as our friend have lost an extraordinary human being.

Aleksander Peczenik was born on November 16, 1937, in Kraków, Poland. In 1955, he took up studies in law at the Jagiellonian University in Kraków, where Kazimierz Opalek was one of his teachers. He completed his academic degrees in record time. In 1960, the year of his marriage to Irena Nowak, he received the master of law (LL.M.), in 1963 the doctoral degree (Iur. Dr.), and in 1966, he qualified himself for lecturing in law (Habilitation). Thus, at 29 years of age, he became professor at the Institute for Methodology of Law, in Katowice, then a branch of the University of Kraków. Three years later, in 1969, he left Poland, and he did so without having acquired any sort of position in the West, in those days a different world. His energy, intelligence, determination, and perseverance helped him to solve the problem. He wrote about 800 letters of application, and received two answers with concrete proposals. They came from Sweden and from Germany. Aleksander Peczenik decided to go to Stockholm, and he stuck to this decision after later receiving further offers. Alf Ross, who wrote the Foreword to Peczenik’s Essays in Legal Theory, published in 1970, was in those days one of Peczenik’s main supporters as he made his way to Scandinavia. From 1969 to 1975, he was Assistant Professor for Philosophy of Law in Stockholm. Alongside his teaching of the philosophy of law in Stockholm, he studied Swedish law so intensively that he was able to pass the Swedish Law Examination in 1975, the year he commenced work as a Senior Lecturer at the Law Faculty in Lund. He had now arrived, after Kraków, at his second location. In 1978, succeeding Tore Strömberg and Karl Olivecrona, he became Professor of Jurisprudence and Law-and-Computers in Lund. From 2003 to 2004, Peczenik served as Samuel Pufendorf Research Professor, and he retired in 2004. In 1983, he earned, in Lund, a doctoral degree (Ph.D.) in philosophy, another sign of his disposition to keep learning on every imaginable front. In 1987, he was awarded an honorary doctorate at the Law Faculty of the University of Lund, and in 1991, he was named as a foreign member of the Finnish Academy of Sciences. After his retirement in Sweden, Aleksander Peczenik embarked on a new career in his homeland. He became Professor of Legal Argumentation and Rhetoric at the Szczecin University in Poland. This new activity, which, we all expected, would culminate in 2007 at the 23rd IVR World Congress, to be held under his presidency in Kraków, the city of his biographical and intellectual origins, was interrupted by his sudden death. That things would come full circle was not to be granted to him. Aleksander Peczenik not only connected a mastery of his field with the permanent enthusiasm of a student, he also was an effective and engaged manager. He was Vice-President of the International Association for Philosophy of Law and Social Philosophy (IVR), and, from 2003 until his death, its President.