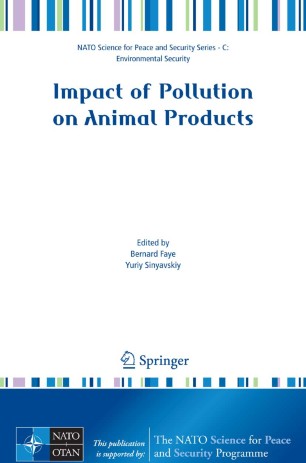 Impact of Pollution on Animal Products

The international advanced research workshop funded by NATO and entitled “impact of pollutions on animal and animal products” was organized at Almaty (Kazakhstan) on 27–30 September 2007. Thirty-one scientists from 12 countries (Kazakhstan, Kirgizstan, Azerbaijan, Ukraine, Russia, France, Great Britain, Italy, Belgium, Romania and Morocco) presented conferences at this meeting to share their experience and results. The programme included three main aspects: (i) generality on the pollution situation in Central Asia and former Soviet Union republics, (ii) the pollution area and pollution origin in Central Asia and Western countries in relation with animal health, and (iii) the relationships between soil contamination, plant contamination and animal products status. The present workshop contributed highly to the exchange between scientists giving the opportunity for researchers from Central Asia to access to new scientific approaches and methodologies, and for European scientists to assess the extent of the environmental problems in this part of the world. No doubt that these exchanges were the main success of the workshop marked by very stimulating discussions. Such meeting was also the opportunity to put on the first stone of a scientific network focused on the subject of the workshop. The importance of pollution in Central Asia in general and in Kazakhstan in p- ticular is a well-known feature and several references are available on the source and localization of pollution problems in those countries. The references are also abundant on the impact of the environmental failures on human health.