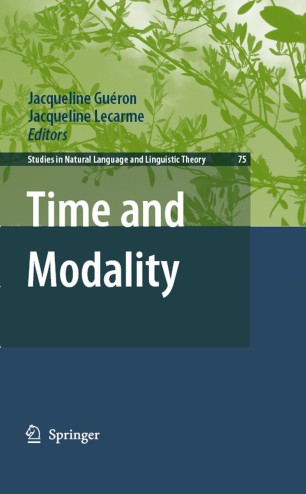 Time and Modality is a unique work of reference; not only does it unite studies which explore the syntax and semantics of tense or modality but it is the first book of its kind to embrace the interaction of tense and modality within a coherent generative model. Various topics are covered in this volume: among them are the counterfactual uses of conditionals, modals, and past tense; the irrealis use of perfective aspect; a special English subjunctive; the interaction of tense assignment and the definition of an event; the modal verb as a causative verb; the interaction of modality, tense, and aktionsart; the contrast between deontic and epistemic modal with respect to tense interpretation; the syntax of epistemic modals; the long-awaited definition of generic and habitual sentence; and the introduction of intensionality in copular clauses.

Although every article deals with English to some degree, two chapters compare the syntax and semantics of tense and modality in Spanish vs English. The authors also investigate Slavic, Germanic, Afro-Asiatic, Oriental, Amerindian Languages and Hungarian.