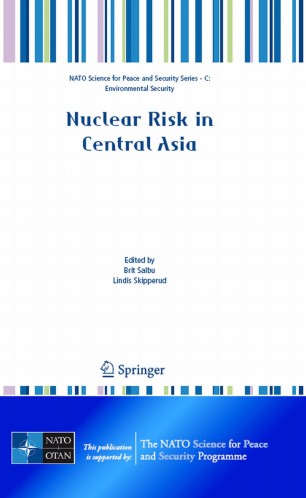 There is a significant number of nuclear and radiological sources in Central Asia, which have contributed, are still contributing, or have the potential to contribute to radioactive contamination in the future. Key sources and contaminated sites of concern are: The nuclear weapons tests performed at the Semipalatinsk Test Site (STS) in Kazakhstan during 1949–1989. A total of 456 nuclear weapons tests have been perf- med in the atmosphere (86), above and at ground surface (30) and underground (340) accompanied by radioactive plumes reaching far out of the test site. Safety trials at STS, where radioactive sources were spread by conventional explosives. Peaceful nuclear explosions (PNEs) within STS and outside STS in Kazakhstan, producing crater lakes (e.g., Tel’kem I and Tel’kem II), waste storage facilities (e.g., LIRA) etc. Technologically enhanced levels of naturally occurring radionuclides (TENORM) due to U mining and tailing. As a legacy of the cold war and the nuclear weapon p- gramme in the former USSR, thousands of square kilometers in the Central Asia co- tries are contaminated. Large amounts of scale from the oil and gas industries contain sufficient amounts of TENORM. Nuclear reactors, to be decommissioned or still in operation. Storage of spent nuclear fuel and other radioactive wastes. In the characterization of nuclear risks, the risks are estimated by integrating the results of the hazard identification, the effects assessment and the exposure assessment.