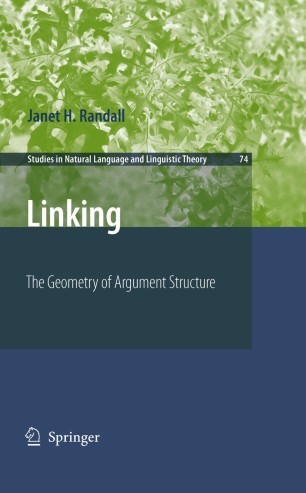 The Geometry of Argument Structure

Linking – how semantic arguments map to the syntax – is one of the challenges for theories of the syntax-semantics interface. In this new approach, Janet Randall explores the hypothesis that the positions of syntactic arguments are strictly determined by lexical argument geometry. Yielding novel – if sometimes surprising – conclusions, her Isomorphic Linking Hypothesis establishes the linking patterns of a wide range of verbs and, with those results, shows how to reason "backwards" from how a given verb's arguments link to what its lexical representation must be. Along the way, the investigation takes on thorny lexical issues – reformulating the Theta Criterion, revisiting the multiple lexical-entry debate, eliminating "indirect" arguments and redefining unaccusativity. It offers new insights into how arguments are represented, assembles a host of argument/adjunct diagnostics, and re-examines the relation between arguments and predicates. The result of this incisive study is a simple and consistent account of linking, integrated with a radical rethinking of the nature of arguments and argument structure.

From the reviews:
"Janet Randall’s Linking: The Geometry of Argument Structure, is an authoritative journey through a minefield of critical problems. Arguing a symmetry between conceptual structure and argument structure, it will richly reward those readers who do themselves the favor of taking the trip." (Samuel Jay Keyser, Professor Emeritus, MIT)

"In this book, Janet Randall, building on much recent research, develops her own version of a geometrical theory of the lexicon and explores a restrictive hypothesis on how lexical entries project into syntactic structure, based on structure preservation. Even those who, like myself, are not so inclined to think of word meaning in geometric terms, will find in this book a striking series of puzzles, challenges, and insights." (Gennaro Chierchia, Haas Foundations Professor of Linguistics, Harvard University)

"Janet Randall's book is a model of how to reason across the interface between conceptual structure and syntax. It is a goldmine of razor sharp observations about argument structure and morphology. Each theoretical step is supported by carefully developed empirical evidence. It will be a lasting accomplishment at both the theoretical and empirical level." (Tom Roeper, University of Massachusetts, Amherst)