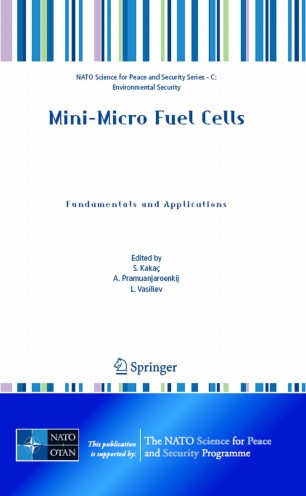 This volume contains an archival record of the NATO Advanced Institute on Mini – Micro Fuel Cells – Fundamental and Applications held in Çesme – Izmir, Turkey, July 22–August 3, 2007. The ASIs are intended to be a high-level teaching activity in scientific and technical areas of current concern. In this volume, the reader may find interesting chapters on Mini- Micro Fuel Cells with fundamentals and applications. In recent years, fu- cell development, modeling and performance analysis has received much attention due to their potential for distributed power which is a critical issue for energy security and the environmental protection. Small fuel cells for portable applications are important for the security. The portable devices (many electronic and wireless) operated by fuel cells for providing all-day power, are very valuable for the security, for defense and in the war against terrorism. Many companies in NATO and non-NATO countries have concentrated to promote the fuel cell industry. Many universities with industrial partners committed to the idea of working together to develop fuel cells. As tech- logy advanced in the 1980s and beyond, many government organizations joined in spending money on fuel-cell research. In recent years, interest in using fuel cells to power portable electronic devices and other small equipment (cell phones, mobile phones, lab-tops, they are used as micro power source in biological applications) has increased partly due to the promise of fuel cells having higher energy density.