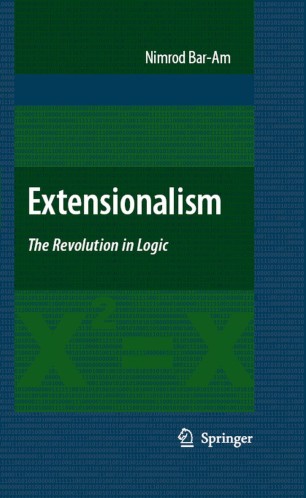 The Revolution in Logic

This vivid and thought-provoking book by the Israeli logician Nimrod Bar-Am impels one to rethink the place of logic in Western thought. It shows that the history of logic from Aristotle to Tarski is the history of the gradual undoing of the classic conflation of logic and empirical science. It sets tomorrow’s agenda for philosophers and historians of logic and scientific method by taking as its starting point the mere fact that, curiously, ancient logic is not as formal as current literature presents it. Rather, as Bar-Am explains, modern formal logic became possible only after a series of bold criticisms of the magnificent Aristotelian system. These criticisms begin with David Hume’s declaration that logic does not sanction induction, follow on with Kant’s view of logic as an extremely limited system, and culminating with Booles’ introduction of logic as an extensional system, and Russell’s solution to his own paradox.

The book offers a breathtaking intellectual odyssey; presenting the development of logic as an evolving critical assessment of approaches to an impossible ideal. Bar-Am handles an extremely complex subject matter in a manner that is both accessible to the general educated reader and challenging to the learned expert, by opening to them live background ideas to dead formulas. The book will easily find its place alongside both general introductions to the history of science and advanced reading lists in the philosophy of logic.