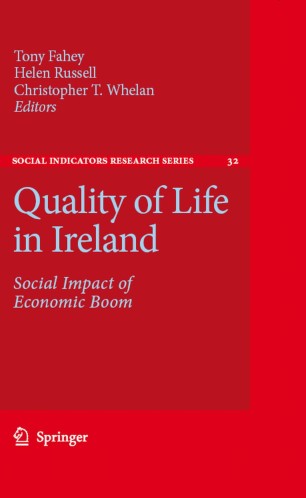 Quality of Life in Ireland

The Irish economic boom has caused the economy in Ireland to roar ahead, but what has it done to Irish society? Some see the rising tide as having lifted all boats, while others argue that the benefits have accrued mostly to those who were already well placed. Some highlight how economic growth has raised living standards, while others say that it has imposed strains on family life, eroded values and communities, and created problems in accessing adequate housing, health care and other services.

So, are we in Ireland now living in ‘the best of times’, or has increased prosperity come at (too high) a cost? And can the rest of the world draw any lessons from what has happened in Ireland? The purpose of this book, which contains a collection of chapters written by some of Ireland’s leading social researchers, is to bring to bear the latest research and empirical evidence to answer these questions. It is aimed at a general audience and seeks to contribute to public debate in Ireland and abroad, while at the same time striving for rigorous, evidence-based argument.

The overall judgment offered by the book is positive, though with qualifications. Ireland still has problems: social inequalities are slow to narrow; the indignities of poverty and hopelessness, though less widespread than before, are still too common; some public services are poor; and traffic congestion frays the nerves. But there is a long list of social fundamentals that are stronger today than before the economic boom arrived.

National moral is among the highest in Europe, most people’s economic circumstances have greatly improved, jobs are astonishingly abundant, people are now flocking into the country rather than out of it, and they are marrying and having children at a higher rate than fifteen years ago.

These are only some of the positives identified in the book. Together they suggest that even on social grounds the Irish economic boom deserves at least two cheers, even if it has far from succeeded in solving all social ills.