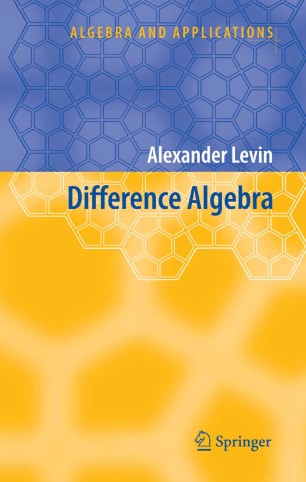 Part of the Algebra and Applications book series (AA, volume 8)

This book reflects the contemporary level of difference algebra; it contains a systematic study of partial difference algebraic structures and their applications, as well as the coverage of the classical theory of ordinary difference rings and field extensions. The monograph is intended for graduate students and researchers in difference and differential algebra, commutative algebra, ring theory, and algebraic geometry. It will be also of interest to researchers in computer algebra, theory of difference equations and equations of mathematical physics. The book is self-contained; it requires no prerequisites other than knowledge of basic algebraic concepts and mathematical maturity of an advanced undergraduate.

“Levin’s Difference Algebra [40] is a milestone in the subject. It is an ever so fundamental and detailed work, in which one does not require the ordinary case of one selected automorphism…an excellent source of numerous results and techniques” (Bulletin of the London Mathematical Society, April 16, 2011)