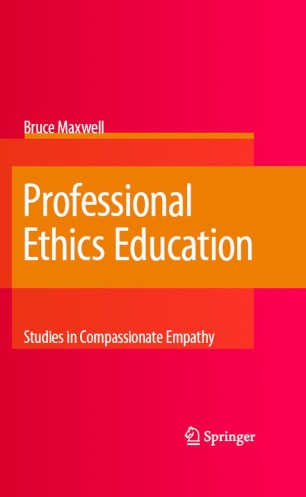 Why is practical ethics training a now requirement of nearly all professional training programmes? The short answer is that it is thought to be conducive to ethical decision-making and ethical behaviour. In recent years, the received idea that competency in moral reasoning implies moral responsibility has been the subject of much critical attention. Today, researchers in moral education widely regard moral reasoning as but one among at least 4 dimensions of moral development alongside moral motivation, moral character and moral sensitivity. Reflecting these developments, educationalists in the diverse fields of medicine, education, business, philosophy and nursing now openly question how to take professional ethics education beyond the development of skills in moral reasoning. Frequently topping the list of suggested improvements is to provide support for empathic capacities of response. This work gives this proposal the sustained attention that it deserves but which it has until now lacked. The challenge of empathic development in practical ethics education, it argues, is to encourage the appropriate extension of natural concern for one’s kith and kin to the needs of strangers as well.