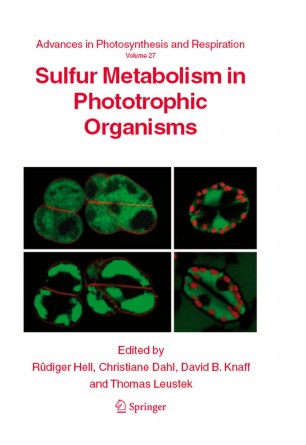 Part of the Advances in Photosynthesis and Respiration book series (AIPH, volume 27)

Sulfur is one of the most versatile elements in life due to its reactivity in different oxidation and reduction states. In phototrophic organisms, the redox properties of sulfur in proteins, and of sulfur-containing metabolites, are particularly important in the interaction between the reductive assimilation processes of photosynthesis and reactive oxygen species that arise as by-products of electron transport chains. Thiol groups in proteins and metabolites are targets of reactive oxygen species, resulting in potential damage and at the same time giving rise to redox signal cascades that trigger repair reactions and adaptation to environmental stress. Further, reduced sulfur compounds play a prominent role as electron donors for photosynthetic carbon dioxide fixation in anoxygenic phototrophic sulfur bacteria. Interest in the investigation of the multiple functions of sulfur-related processes has increased exponentially in recent years, especially in molecular and cellular biology, biochemistry, agrobiotechnology and ecology. This book provides, for the first time, in-depth and integrated coverage of the functions of sulfur in phototrophic organisms including bacteria, plants and algae; it bridges gaps between biochemistry and cellular biology of sulfur in these organisms, and of biology and environments dominated by them. This book is designed to be a comprehensive resource on sulfur in phototrophic organisms for advanced undergraduate and graduate students, beginning researchers and teachers in the area of photosynthesis, bacterial energy metabolism, biotechnology, plant nutrition, plant production and plant molecular physiology.