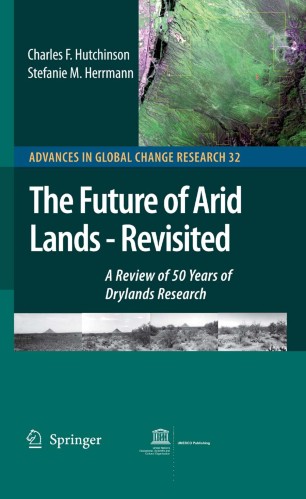 The Future of Arid Lands — Revisited

A Review of 50 Years of Drylands Research

The Future of Arid Lands, edited by Gilbert White and published in 1956, comprised papers delivered at the "International Arid Lands Meetings" held in New Mexico in 1955. At these meetings, sponsored by UNESCO and the American Association for the

Advancement of Science, experts considered the major issues then confronting the world’s arid lands and developed a research agenda to address these issues.

The Future of Arid Lands – Revisited, commissioned by UNESCO in 2005, reexamines this earlier work. Written by researchers from the University of Arizona, this volume first looks at the state of science in 1956 and attendant contemporary views of arid lands development. It then considers how scientific understanding of the processes governing arid lands has since evolved, before extracting lessons from these comparisons that might guide current and future arid land managers and speculating on what the future might hold for arid lands.

Reflecting the shift in drylands thinking from a piecemeal or a ‘magic bullet’ approach to a systems-based approach that considers people as integral to solving problems, this volume will appeal not just to land managers, but to everyone involved in environmental issues who wishes to gain a better understanding of the state of arid lands science today.