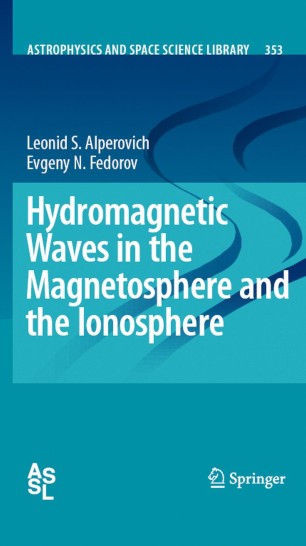 Hydromagnetic Waves in the Magnetosphere and the Ionosphere

The book deals with Ultra-Low-Frequency (ULF)-electromagnetic waves observed on Earth and in Space. These are so-called geomagnetic variations or pulsations. Alfvén's discovery related to the influence of the strong magnetic field on the conducting fluids (magnetohydrodynamics) led to development of the concept that the ULF-waves are magnetospheric magnetohydrodynamic (MHD)-waves. MHD-waves at their propagation gather information about the magnetosphere, ionosphere, and the ground. There are two applied aspects based on using the ULF electromagnetic oscillations.

The first one is the ground-based diagnostics of the magnetosphere. This is an attempt to monitor in the real time the magnetosphere size, distance to the last closed field-lines, distribution of the cold plasma, etc.

The second one is the deep electromagnetic sounding of the Earth. The basis for these studies is the capability of any electromagnetic wave to penetrate a conductor to a finite depth. The ULF-waves can reach the depth of a few hundred kilometers.

Thus, geophysicists now have a unique tool that can be applied to study the solid Earth as well as its gas-plasma shells - the ionosphere and magnetosphere.

This book integrates topics pertaining to all scales of the MHD-waves, emphasizing the linkages between the ULF-waves below the ionosphere on the ground and magnetospheric MHD-waves. It will be most helpful to graduate and post-graduate students, familiar with advanced calculus, who study the science of MHD-waves in the magnetosphere and ionosphere.