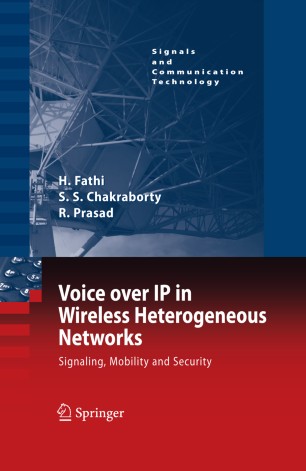 The convergence of different types of traffic has preceded the convergence of systems and services in a wireless heterogeneous network. Voice and data traffic are usually treated separately in both 2G and 2.5G wireless networks. With advances in packet switching technology and especially with the deployment of wireless heterogeneous systems, both speech and data traffic are carried over wireless links by the same IP-based packet-switched infrastructure. However, this combination faces some challenges due to the inherent properties of the wireless network. The requirements for good quality VoIP communications are difficult to achieve in a time-varying environment due to channel errors and traffic congestion and across different systems. The provision of VoIP in wireless heterogeneous networks requires a set of time-efficient control mechanisms to support a VoIP session with acceptable quality. The focus of Voice over IP in Wireless Heterogeneous Networks is on mechanisms that affect the VoIP user satisfaction while not explicitly involved in the media session. This relates to the extra delays introduced by the security and the signaling protocols used to set up an authorized VoIP session and to the disruption caused by the user mobility during the session. Voice over IP in Wireless Heterogeneous Networks thus investigates and proposes cross-layer techniques for realizing time-efficient control mechanisms for VoIP: signaling, mobility and security.

Hanane Fathi received her M.S. in Electrical Engineering and her Ph.D. in Wireless Communications Engineering from Aalborg University, Denmark, in 2002 and 2006 respectively. She also holds a M. S. in Information Technology from Ecole Centrale d'Electronique, Paris, France. She visited Imai laboratory at the University of Tokyo, Japan, from October 2004 to March 2005. From 2006 to 2008, she worked as a research scientist at the Research Center for Information Security (RCIS) at the National Institute of Advanced Industrial Science and Technology (AIST), Japan. Currently, she is a assistant research Professor at Aalborg University, Denmark. Her research interests include network security, wireless communications security, anonymous communication, privacy and network coding.

Shyam Chakraborty is Reader in wireless technology at University of Ulster and located at the Magee Campus. He received his M. Tech. from IIT Delhi and Licenciate and Doctor of Technology degrees from Helsinki University of Technology. He was the recipient of Academy Research Fellowship of academy of Finland (2000-2004). He was also with Ericsson Corporate Research (2005-2007). His research interests are architecture of IP based wireless networks; modelling and analysis of protocols; reliable and secure communications; VoIP and IMS over wireless systems etc.

Prof. Ramjee Prasad is editor-in-chief of the Wireless Personal Communications journal and he has published over 20 academic books in the field of Wireless Communications. He was series advisor with Artech House though now publishes his books for Springer and also Wiley.