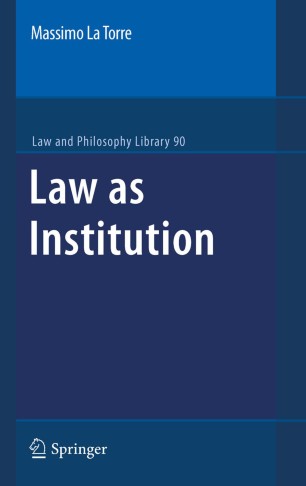 The book’s argument moves from discussing the relation between law and power. Theories defending the primacy of law over power are played against doctrines which center around the prevailing role of law. Legal positivism and natural law are here the real issue at stake. Constitutionalism and the rule of law are then seen as a development of the modern natural law tradition. But the book’s main move is a consideration of law as a phenomenon possibly connected with language. Once traditional imperativist strategies are seen as unsatisfactory, and nevertheless law is accepted as being a social fact, there is the possibility of addressing such fact as somehow analogically linked with a system of language. In a sense, language is thought of as fundamental or primordial ontological dimension, so that this can offer the key to address and understand the question of what reality is. The question of meaning overlaps that of being, not only as far as the being of the world is concerned but also with respect to the nature of law. The concept of law -could not be approached without addressing the issue of law as a language. To this purpose "use theory" is assessed and taken as a possible candidate to build up a sensible theory of legal validity. From this angle institutionalism is then seen to be the most fruitful approach to conceptualize the ontology of law, though some reform in the standard theory and in its more recent developments is proposed to render more plausible the notion of "institution". Finally, the strong normative side of a (legal) institution is studied. The relation of law and morality is assessed by pointing out the difference between the "constitutive" character of law and the "regulative" core of morality. However, an institution is both an "is" and an "ought", while law is at the same time "facticity" and "normativity.