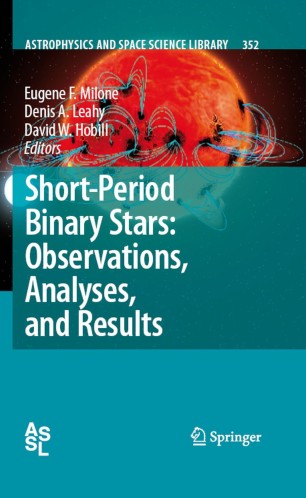 Short-period binaries run the gamut from widely separated stars to black-hole pairs; in between are systems that include neutron stars and white dwarfs, and partially evolved systems such as tidally distorted and over-contact systems. These objects represent stages of evolution of binary stars, and their degrees of separation provide critical clues to how their evolutionary paths differ from that of single stars. The widest and least distorted systems provide astronomers with the essential precise data needed to study all stars: mass and radius. The interactions of binary star components, on the other hand, provide a natural laboratory to observe how the matter in these stars behaves under different and often varying physical conditions. Thus, cataclysmic variables with and without overpoweringly strong magnetic fields, and stars with densities from that found in the Sun to the degenerate matter of white dwarfs and the ultra-compact states of neutron stars and black holes are all discussed. The extensive index permits cross-referencing.

The objects being discussed are carefully defined in each section and the contributions are organized according to the compactness of the binaries that are treated. Some treatments are of individual objects; others are more general.

The observational techniques that are used by the contributors to throw light on these objects include gravitational wave investigations, X-ray, radio, infrared, and optical astronomy; and the ways in which these objects are analyzed is also discussed. Among the specific objects reported is the Double Pulsar, highlighting what observations of this object tell us about fundamental physics.

The level of the book is appropriate for both professional astronomers in the field as well as people interested in other fields and dedicated amateur astronomers.