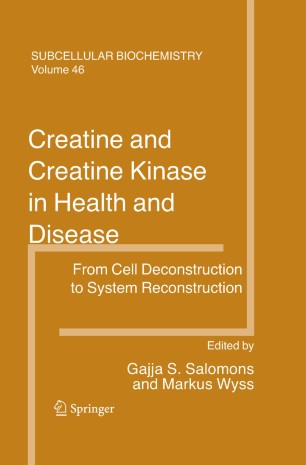 Creatine and Creatine Kinase in Health and Disease

Although creatine was discovered already in the 1830s, it is only in recent years that its crucial role for human health and general well-being has been increasingly realized and appreciated. A number of beneficial health effects have been ascribed to oral creatine supplementation, such as neuroprotective, ergogenic, anti-diabetic, anti-inflammatory, antiviral, or antitumor effects. Creatine may even improve memory and intelligence. In the present book, emphasis is placed on the intricate interplay between creatine and creatine kinase function on one hand, and proper brain function, neurodegenerative disease and/or neuroprotection on the other hand. The book also elaborates on the recently identified inborn errors of creatine biosynthesis and transport, the so-called cerebral creatine deficiency syndromes. The clinical hallmarks of these disorders are mental retardation, epilepsy, autistic-like behaviour, and speech and language delay. In addition, the muscle growth- and strength-promoting effects, the pharmacokinetics and the safety of oral creatine supplementation are discussed. Finally, the present book outlines the emerging "systems biology" approaches for understanding the pleiotropic effects of creatine and creatine kinase, and hypothesizes on the most promising and influential future avenues of research towards creatine-based nutritional strategies for the prevention of neurological disease, and for improving the quality of life in general.