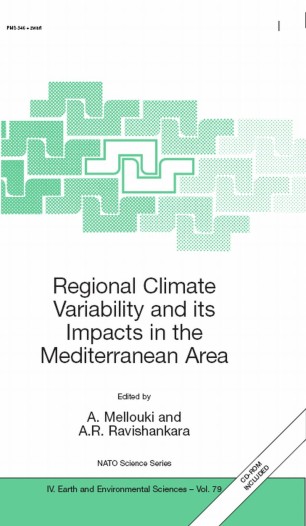 Regional Climate Variability and its Impacts in The Mediterranean Area

Global change due to natural processes and anthropogenic activity as well as the natural variability of the climate system will impact all areas of the globe. However, the impact will not be uniform and different impacts of differing magnitude and nature will be felt in various regions of the globe. The Mediterranean region, like other regions of the world, will face some unique and different impacts.

The uniqueness and difference in the Mediterranean are to be expected given some special dynamical, chemical, biological, and land characteristics of the region. The Mediterranean region is often exposed to multiple stresses, such as a simultaneous water shortage and air pollution. This is a consequence of its unique location and emissions. One of the common stresses in North Africa is water shortage and distribution amongst the seasons. Air pollution can often add to the water stress. Air pollution occurs due to emissions in the region as well as from those transported from other areas and can occur when there is low water availability. Multiple stresses are likely to grow in the future when human induced stress is likely to increase due to the rapid industrialization of the region.

This NATO workshop was set up to discuss these issues in general, and the influence of chemical emissions and transformation in particular. This workshop was "special" because it involved a very large number of scientists (>75%) from the region, either from North Africa or the Mediterranean Europe. Many key issues, some of which are specific to this region, were identified. Details of the finding and suggestions are presented in the articles in this volume. The workshop was held in Marrakech, Morocco, from 23rd to 26th November 2006.