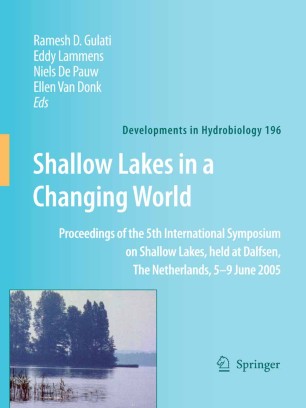 Shallow Lakes in a Changing World

Proceedings of the 5th International Symposium on Shallow Lakes, held at Dalfsen, The Netherlands, 5–9 June 2005

Part of the Developments in Hydrobiology book series (DIHY, volume 196)

Since the late 1980s, shallow lakes in Europe and North America have been receiving concerted attention from limnologists, fishery biologists and lake managers. These developments relate to deterioration of water quality in the lakes due to pollution and accelerated eutrophication, caused by increased urbanization and agriculture in the lake catchments, overexploitation of fish and higher water level fluctuations. The water-quality and management problems of lakes have led to a greater need for fundamental researches on shallow lakes in order to gain a deeper insight into the structure and functioning of the food web in these waters. New knowledge relating to littoral–pelagial interactions and the sediment–water interface has facilitated the development of new lake restoration techniques.

This volume, with 41 peer-reviewed papers, comprises the proceedings of the 5th International Symposium on Shallow Lakes, which was held at Dalfsen, The Netherlands, on 5–9 June 2005. It has the theme Shallow Lakes in a Changing World and deals with water-quality issues, such as changes in lake limnology, especially those driven by eutrophication and pollution, increased nutrient loading and productivity, perennial blooms of cyanobacteria and loss of biodiversity. The general consensus is that the lakes under restoration respond by showing an increase in water clarity followed by an increase in macrophyte coverage and biomass. Consequently, there is now ground for theoretical speculations on the so-called ‘alternate stable states’ observed in many such lakes under restoration.