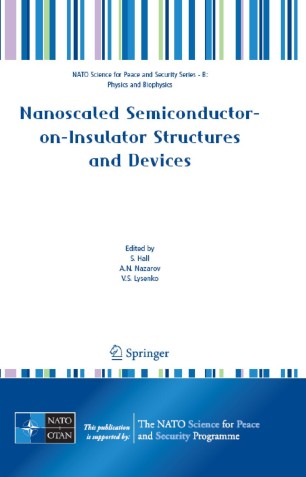 This proceedings volume constitutes an archive of the contributions of the key-speakers who attended the NATO Advanced Research Workshop on “Nanoscaled Semiconductor-On-Insulator Structures and devices” held in the Tourist and Recreation Centre “Sudak” (Crimea, Ukraine) from 15 to 19 October 2006. The semiconductor industry has sustained a very rapid growth during the last three decades through impressive technological developments which have resulted in products with higher performance and lower cost per function. After many years of development it is now confidently predicted that semiconductor-on-insulator materials will enter and increasingly be used by manufacturing industry. The wider use of semiconductor (es- cially silicon) on insulator materials will not only enable the benefits of these materials to be demonstrated but, also, will drive down the cost of substrates which, in turn, will stimulate the development of other novel devices and applications. Thus the semiconductor-on-insulator materials of today are not only the basis for modern microelectronics but also for future nanoscale devices and ICs. In itself this trend will encourage the promotion of the skills and ideas generated by researchers in the Former Soviet Union and Eastern Europe. Indeed, one of the goals of this Workshop is to promote the development of SOI technologies worldwide.