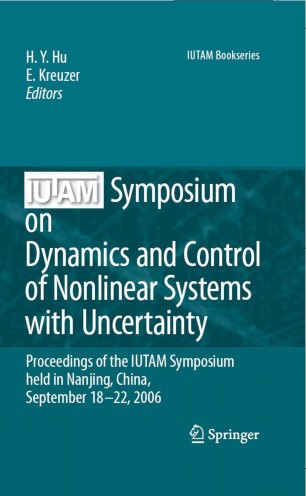 Iutam Symposium on Dynamics and Control of Nonlinear Systems with Uncertainty

Proceedings of the IUTAM Symposium held in Nanjing, China, September 18-22, 2006

The last decade has witnessed an increasing interest towards the dynamics and control of nonlinear engineering systems from the scientists engaged in nonlinear dynamics and the control engineers. Both groups of people have recognized the importance of interaction between nonlinear dynamics and robust control during their efforts to improve the dynamic performance of engineering systems with uncertainty, which comes from either the random excitations, such as wind and earthquake, or the modelling errors of real systems including their sensors, controllers and actuators. The dynamics and control of nonlinear systems with uncertainty, therefore, is a vital interdisciplinary topic related to both stochastic systems and deterministic systems. This volume contains the papers presented at the IUTAM Symposium on Dynamics and Control of Nonlinear Systems with Uncertainty, which was sponsored by the International Union of Theoretical and Applied Mechanics (IUTAM) and held at Nanjing University of Aeronautics and Astronautics, China, 18-22 September, 2006. The aim of the symposium was to bringing together the scientists to discuss the advances in dynamics and control of nonlinear systems, especially those with uncertainties in either system modeling or excitation. The scientific committee, appointed by the Bureau of IUTAM, includes the following members: F. L. Chernousko, Moscow, Russia E. Kreuzer, Hamburg, Germany (Co-Chairman) H. Y. Hu, Nanjing, China (Chairman) A. H. Nayfeh, Blacksburg, USA G. Rega, Rome, Italy W. Schiehlen, Stuttgart, Germany (IUTAM representative) K. Sobczyk, Warsaw, Poland G. Stepan, Budapest, Hungary H. Troger, Wien, Austria ix x Preface