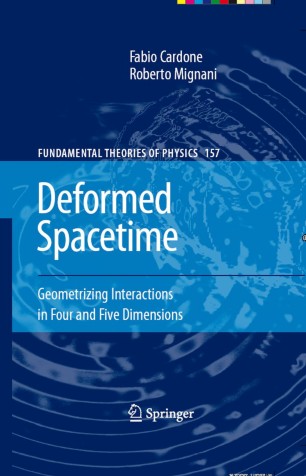 This volume provides a detailed discussion of the mathematical aspects and the physical applications of a new geometrical structure of space-time, based on a generalization ("deformation") of the usual Minkowski space, as supposed to be endowed with a metric whose coefficients depend on the energy.
Such a formalism (Deformed Special Relativity, DSR) allows one

Moreover, the four-dimensional energy-dependent space-time is just a manifestation of a larger, five-dimensional space in which energy plays the role of a fifth (non-compactified) dimension. This new five-dimensional scheme (Deformed Relativity in Five Dimensions, DR5) represents a true generalization of the usual Kaluza-Klein (KK) formalism.
The mathematical properties of such a generalized KK scheme are illustrated. They include the solutions of the five-dimensional Einstein equations in vacuum in most cases of physical relevance, the infinitesimal symmetries of the theory for the phenomenological metrics of the four interactions, and the study of the five-dimensional geodesics.
The mathematical results concerning the geometry of the deformed five-dimensional spacetime (like its Killing symmetries) can be applied also to other multidimensional theories with infinite extra dimensions.
Some experiments providing preliminary evidence for the hypothesized deformation of space-time for all the four fundamental interactions are discussed.

"This book deals with geometrizations of physical fields. The main emphasis is on theories with 4 and those with 5 space-time dimensions. Several types of deformations are considered … . Almost 90 pages are given to the appendices which contain a lot of formulas in several subcases for the material used in the book. Reference list and subject index close this monograph valuable for specialists interested in this type of alternatives to General Relativity Theory." (Hans-Jürgen Schmidt, Zentralblatt MATH, Vol. 1123 (1), 2008)