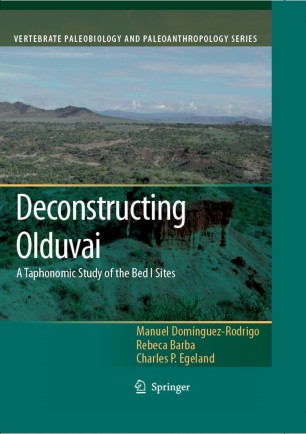 Deconstructing Olduvai: A Taphonomic Study of the Bed I Sites

Plio-Pleistocene sites are a rare occurrence in same sites. This combination of factors is the archaeological record. When they are unique in East African Plio-Pleistocene uncovered, the faunal materials so crucial to archaeology and has stimulated much debate unlocking their behavioral meaning are often over the socioeconomic function of early sites. poorly preserved. For example, at Koobi Fora, Influential models of early hominid behavior Kenya, a prolific region that preserves several in the late 1960s and early 1970s were based classic Plio-Pleistocene sites, many bones are exclusively on information from Olduvai affected by poor cortical surface preservation Gorge (Leakey, 1971). Although Isaac’s (e. g. , (Isaac, 1997). Such taphonomic vagaries limit 1978) work at Koobi Fora expanded their the range of questions that can be addressed application, the subsequent critiques, modi- with these assemblages. In other instances, cations, and reformulations of these models access to materials can be limited due to local were based almost solely on studies from politics or rivalries between individual Olduvai (Binford, 1981, 1984; Bunn, 1981; research teams. As a result, many important Potts, 1982, 1988; Bunn and Kroll, 1986; assemblages either remain unstudied or have Blumenschine, 1995; Rose and Marshall, been interpreted without the advantage of a 1996; Domínguez-Rodrigo, 1997a, 2002; fully developed taphonomic framework, a sit- Plummer, 2004). Having said that, it is also uation that all but guarantees stagnant inter- clear that continued work at Koobi Fora and pretations.