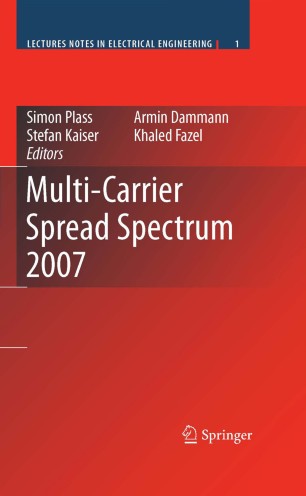 Proceedings from the 6th International Workshop on Multi-Carrier Spread Spectrum, May 2007, Herrsching, Germany

The benefits and success of multi-carrier (MC) modulation on one side and the flexibility offered by the spread spectrum (SS) technique on the other side have motivated many researchers to investigate the combination of both techniques since 1993. This combination known as multi-carrier spread spectrum (MC-SS) benefits from the advantages of both systems and offers high flexibility, high spectral efficiency, simple detection strategies, narrow-band interference rejection capabilities, etc. The basic principle of this combination is straightforward: The spreading is performed as direct sequence spread spectrum (DS-SS) but instead of transmitting the chips over a single carrier, several sub-carriers are employed. The MC modulation and demodulation can easily be realized in the digital domain by performing IFFT and FFT operations. The separation of the users’ signals can be performed in the code domain. MC-SS systems can perform the spreading in frequency direction, which allows for simple signal detection strategies. Since 1993, MC-SS has been deeply studied and new alternative solutions have been proposed. Meanwhile, deep system analysis and comparison with DS-CDMA have been performed that show the superiority of MC-CDMA. The aim of Multi-Carrier Spread Spectrum 2007 is to edit the ensemble of the newest contributions and research results in this new field that have been presented during the 6th International Workshop on Multi-Carrier Spread Spectrum (MC-SS 2007), held in Herrsching, Germany.

Stefan Kaiser was the first researcher to address the institutional and legal aspects of the future air navigation systems in a pioneering thesis presented to the Institute of Air and Space Law, McGill University.