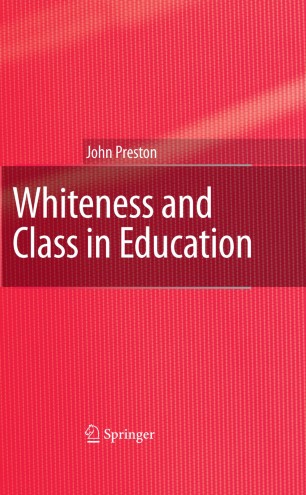 Whiteness and Class in Education

The critical study of whiteness has influenced anti-racist pedagogy and research. A volatile area of study, in terms of the re-centering of white discourses and the appropriation of the writings of black scholars, confronting whiteness has become a controversial but potentially radical way of approaching educational issues. In this pioneering volume critical whiteness studies is applied in the United Kingdom in a variety of educational contexts. Although whiteness is considered to be a system of oppression that benefits white students and teachers in educational arenas it is not necessarily monolithic. Whiteness is flexible and inflected by class to produce new ‘whiteness(es)’ that are no less racist in intent or practice.

Through the use of ethnographic, biographical and documentary research how whiteness ‘works’ in education is revealed. The ways in which working class whites are represented as ‘white trash’ or ‘chav’; the subtle actions of white middle class learners to reduce diversity in adult education and the pre-modern qualities of white ruling class schooling are used to highlight both divergence and congruence in the racial formation of whiteness. Policy issues are also considered, in particular the merits of regulating ‘hate speech’ in universities and the ways in which racist ‘civil defence pedagogies’ have become embedded in educational and homeland security policies.

However, this book does not just consider the practices of whiteness but also how practitioners might consider critical whiteness studies in anti-racist practice. It is concerned with not only identifying how ‘white supremacy’ continues to dominate educational discourse and practice but how it can be resisted.

From the reviews: “Preston is a serious academic. The book … is ambitious in scope (including new empirical data as well as wide ranging reviews of the contemporary theoretical literature) and written with a clear voice that does not flinch from critiquing some of the key figures in the field. … In the field of race and class inequities in UK education, this is one of the most important books of the decade. It deserves a wide readership … .” (David Gillborn, Studies in the Education of Adults, Vol. 41 (2), 2009)
Buy options