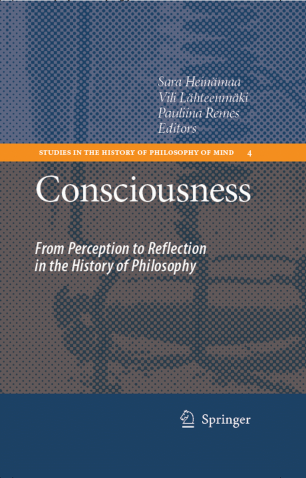 From Perception to Reflection in the History of Philosophy

Part of the Studies In The History Of Philosophy Of Mind book series (SHPM, volume 4)

Despite decades of theoretization, consciousness continues to haunt contemporary philosophy of mind. The coherence and validity of the concept are in question, yet consciousness seems to resist the projects of reduction and naturalization. This collection opens a diachronical perspective to intuitions about consciousness and our aspiration of coming to grips with it. Through investigating ancient, medieval, early modern, and modern discussions in their original philosophical context, the articles offer understanding of the emergence of our problems concerning consciousness, as well as a wealth of alternative ways of conceptualizing it.

Consciousness: From Perception to Reflection in the History of Philosophy shows that the concept of consciousness was explicated relatively late in the tradition, but that its central features, such as reflexivity, subjectivity and aboutness, attained avid interest very early in philosophical debates. This book reveals how these features have been related to other central topics, such as selfhood, perception, attention and embodiment. At the same time, the articles display that consciousness is not just an isolated issue of philosophy of mind, but is bound to ontological, epistemological and moral discussions. Integrating historical inquiries into the systematic ones enables understanding the complexity and richness of conscious phenomena.

"The fourteen essays collected in this book discuss the similarities and dissimilarities in the concepts related to consciousness from ancient to medieval, Enlightenment and nineteenth and twentieth century philosophy. … will be of interest to historians of philosophy. … I found this book an interesting read. There is a comprehensive bibliography, and both a name and subject index that will be helpful to researchers." (Peter B. Raabe, Metapsychology Online Reviews, Vol. 12 (33), August, 2008)