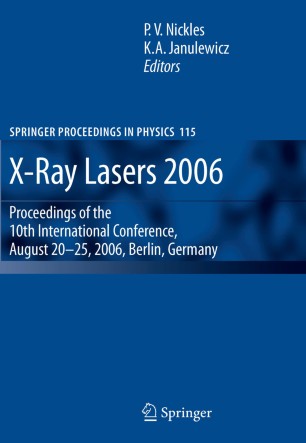 Proceedings of the 10th International Conference

The search for table-top and repetitive pump schemes during the last decade has been the driving force behind the spectacular advances demonstrated during the 10th International Conference on X-Ray Lasers, organized in 2006 in Berlin. Since 1986, international experts have gathered every two years at this established conference to discuss the progress in theory, experiment and application of plasma-based soft X-ray lasers. Traditionally, the conference sessions devoted to complementary and alternative sources of short wavelength radiation, such as high harmonics, XFEL or incoherent X-rays are organized so as to emphasize the role of X-ray laser research in relation to the other short wavelength sources. Grazing incidence pumping (GRIP) and seeding with high harmonics were the dominant topics of the conference. High repetition rate and portable X-ray lasers were reported to have been applied in metrology and photochemistry for the first time.
The proceedings of this series of conferences constitute a comprehensive source of reference of the acknowledged state-of the-art in this specific area of laser and plasma physics.

"This book is an excellent reference for researchers and professionals interested in the development of tabletop X-ray lasers. This 10th international conference brought researchers together who work on a wide spectrum of X-ray lasers … . In addition, the reader will find papers on higher-order harmonics generation as well as presentations on theory and simulations, including hydrodynamic simulations on laser plasma generation. … I highly recommend this comprehensive reference." (Axel Mainzer Koenig, Optics and Photonics News, December, 2007)