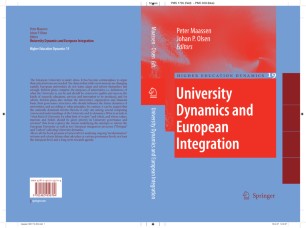 The European University is under stress. It has become commonplace to argue that radical reforms are needed. The claim is that while environments are changing rapidly, European universities do not learn, adapt and reform themselves fast enough. Reform plans comprise the purposes of universities, i.e. definitions of what the University is, can be and should be, criteria for quality and success, the kinds of research, education., services and innovation to be produced, and for whom. Reform plans also include the universities’ organization and financial basis, their governance structures, who should influence the future dynamics of universities, and according to what principles. In contrast, it can be argued that the currently dominant reform rhetoric is only one among several competing visions and understandings of the University and its dynamics. What is at stake is "what kind of University for what kind of society" and which, and whose values, interests and beliefs should be given priority in University governance and reforms? This book explores the visions underlying the attempts to reform the European University as well as two European integration processes ("Bologna" and "Lisbon") affecting University dynamics. Above all, the book presents a framework for analyzing ongoing "modernization" reforms and reform debates that take place at various governance levels, not least the European level, and a long-term research agenda.

Academic background in Public policy analysis, with a focus on the field of higher education policy studies. Professional experience includes the directorship (1997-2000) of the Center for Higher Education Policy Studies (CHEPS), University of Twente. In addition, major experience in system and institutional level reviews in higher education, at the assignment of individual universities and colleges, national Ministries and governments, as well as international bodies and organisations, such as OECD, UNESCO and World Bank.

"University Dynamics and European Integration is a collaborative effort aiming to explore the visions underlying the attempts to reform the European University. … This book invites reformers to reflect on their intents. … Policymakers have picked on a topic where academics have heartfelt things to say, and this work promises to be an invitation to a significant and interesting discussion." (Tito Correa, Times Higher Education Supplement, October, 2007)