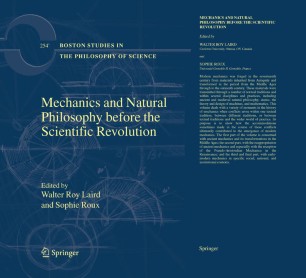 Mechanics and Natural Philosophy Before the Scientific Revolution

Part of the Boston Studies in the Philosophy of Science book series (BSPS, volume 254)

Modern mechanics was forged in the seventeenth century from materials inherited from Antiquity and transformed in the period from the Middle Ages through to the sixteenth century. These materials were transmitted through a number of textual traditions and within several disciplines and practices, including ancient and medieval natural philosophy, statics, the theory and design of machines, and mathematics.

This volume deals with a variety of moments in the history of mechanics when conflicts arose within one textual tradition, between different traditions, or between textual traditions and the wider world of practice. Its purpose is to show how the accommodations sometimes made in the course of these conflicts ultimately contributed to the emergence of modern mechanics.

The first part of the volume is concerned with ancient mechanics and its transformations in the Middle Ages; the second part with the reappropriation of ancient mechanics and especially with the reception of the Pseudo-Aristotelian Mechanica in the Renaissance; and the third and final part, with early-modern mechanics in specific social, national, and institutional contexts.