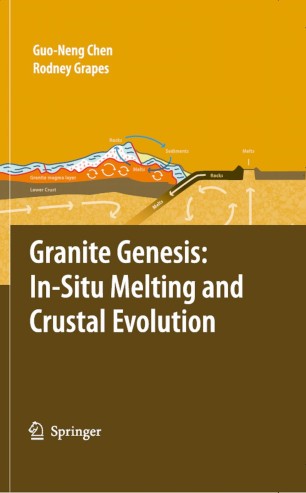 Granitic rocks are a major component of the continental crust and the many and complex problems of their origin that have challenged geologists over some 200 years still are presenting challenges today. Current ideas of granite formation involve lower crustal melting, segregation, ascent (as dykes or diapirs) and emplacement in the upper crust.

In this book we suggest an alternative model for the origin of granite in terms of in-situ meltingintracrustal convection that physically determines the process from partial melting of mid-upper crustal rocks to formation of a convecting magma layer. We illustrate the model using the geological, geochemical and geophysical studies from Australia, North and South America, Europe and China, and conclude that heat convection within a crustal partial melting layer is essential for formation of granite magma and that without convection, partial melting of rocks produces migmatites rather than granites. Granite is layer-like within the crust, and shape and size of granite bodies reflect the geometric relationship between an irregular upper surface of the crystallised magma layer and erosion surface. Repeated melting of the crust generates downward-younging granite sequences. Chemical and isotopic compositions of granites indicate differentiation within the magma rather than different deep sources.
Of a number of proposed heat sources that can cause mid-upper crustal anatexis, large-scale crustal melting and formation of a granite magma layer is considered to be primarily related to plate convergence. A dynamic model with examples from the western Pacific continental margin in SE China and Tethys-Tibet is proposed to explain the relationship between plate convergence, granite and compressive deformation of the continental crust. Mineralisation related to granite formation, fault-block basins, formation of continental red beds and volcanism with examples from SE China, are also discussed in terms of the new model. In a final section, we suggest a new rock cycling model of the continental crust and the concept of Geochemical Fields of Elements, illustrating the unity between the microcosm and macrocosm of the natural world.

Audience: This book will be of interest to scientists, researchers and students in geology, geophysics, geochemistry and economic geology.