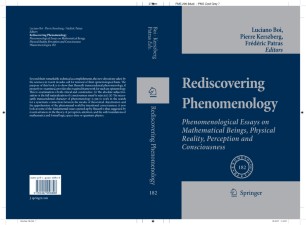 Beyond their remarkable technical accomplishments, the new directions taken by the sciences in recent decades call for renewal of their epistemological basis. The purpose of this book is to show that Husserl’s transcendental phenomenology, if properly re-examined, provides the required framework for such an epistemology. This re-examination is both critical and constructive. (i) The absolute subjectivization or the full naturalization of consciousness must be rejected. (ii) The necessarily transcendental character of phenomenology is put to work in the search for a systematic connection between the modes of theoretical objectivation and the apprehension of the phenomenal world by intentional consciousness. A new look at some of the fundamental issues opened up by Husserl is thus suggested by recent advances in the theory of perception, attention, and the will; foundations of mathematics and formal logic; space-time or quantum physics.