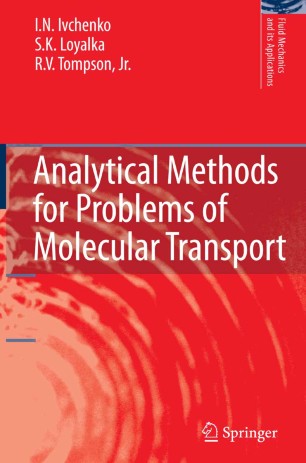 Part of the Fluid Mechanics and Its Applications book series (FMIA, volume 83)

The transport of a given species (atoms, molecules, neutrons, photons, etc. ), either through its own kind or through some other host medium, is a problem of considerable interest. Practical applications may be found in many technologically and environmentally relevant areas such as the transport of neutrons in a nuclear power reactor or in a nuclear weapon, the transport of ions and electrons in plasma, the transport of photons which constitutes radiative heat transfer in various industrial, environmental and space applications, the transport of atoms or molecules of one species either through itself or as one component of a multi-component gas mixture, and the interactions of such gas mixtures with various solid and liquid surfaces such as one might find associated with capillary tubes, aerosol particles, interstellar dust grains, etc. . These application areas are obviously quite broad and it is readily apparent that there are, indeed, few scientific activities that do not require some level of understanding of transport processes. One of the most important and influential texts in the area of transport theory has been The Mathematical Theory of Non-Uniform Gases by Sidney Chapman and T. G. Cowling that was first printed in 1939. This book, along with several other more recent texts (Hirschfelder, J. O. , Curtiss, C. F. and Bird, R. B. , Molecular Theory of Gases and Liquids, John Wiley and Sons, NY, 1954; Kogan, M. N.