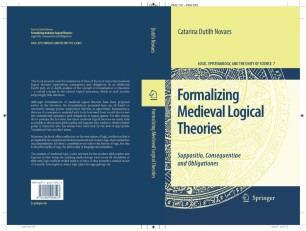 Part of the Logic, Epistemology, and The Unity of Science book series (LEUS, volume 7)

This book presents novel formalizations of three of the most important medieval logical theories: supposition, consequence and obligations. In an additional fourth part, an in-depth analysis of the concept of formalization is presented – a crucial concept in the current logical panorama, which as such receives surprisingly little attention.

Although formalizations of medieval logical theories have been proposed earlier in the literature, the formalizations presented here are all based on innovative vantage points: supposition theories as algorithmic hermeneutics, theories of consequence analyzed with tools borrowed from model-theory and two-dimensional semantics, and obligations as logical games. For this reason, this is perhaps the first time that these medieval logical theories are made fully accessible to the modern philosopher and logician who wishes to obtain a better grasp of them, but who has always been held back by the lack of appropriate ‘translations’ into modern terms.

The analysis of medieval logic is also relevant for the modern philosopher and logician in that, being the unifying methodology used across all disciplines at that time, logic really provided unity to science. It thus presents a unified model of scientific investigation, where logic plays the aggregating role.