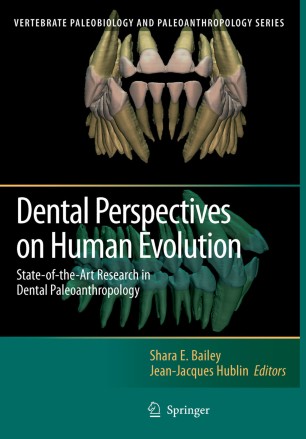 Dental Perspectives on Human Evolution: State of the Art Research in Dental Paleoanthropology

S. E. BAILEY Department of Human Evolution Max Planck Institute for Evolutionary Anthropology Deutscher Platz 6 D-04103 Leipzig, Germany and Center for the Study of Human Origins, Department of Anthropology, New York University, 25 Waverly Place New York, NY 10003, USA sbailey@nyu. edu J. -J. HUBLIN Department of Human Evolution Max Planck Institute for Evolutionary Anthropology Deutscher Platz 6 D-04103 Leipzig, Germany hublin@eva. mpg. de When faced with choosing a topic to as teeth represent, by far, the most abundant be the focus of the first symposium material documenting different species of in Human Evolution at the Max Planck extinct non-human primates and hominins. As Institute for Evolutionary Anthropology in such, much of what we know about non- Leipzig, a paleoanthropological perspective human primate and hominin evolution is based of dental anthropology was a natural choice. on teeth. Teeth make up a disproportionate number Teeth have been a focus of interest for of the fossils discovered. They represent physical anthropologists over many gen- strongly mineralized organs of compact shape, ations. Teeth provide a multitude of which allow better preservation in geological information about humans – including deposits and archaeological sites than any cultural treatment, pathology, morphological other part of the skeleton. As a result, variation, and development. The presence of since the discoveries of the first fossils of culturally induced wear (toothpick grooves, extinct species, vertebrate paleontology has for example) reveals something about what been built primarily on analyses of teeth.