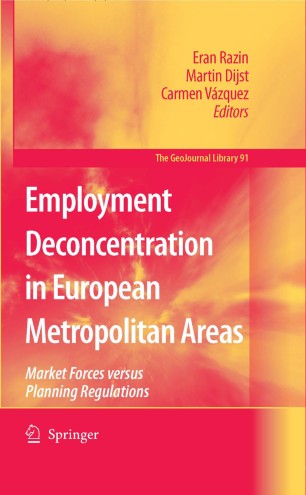 Part of the The GeoJournal Library book series (GEJL, volume 91)

Spatial deconcentration of economic activities, particularly the growth of suburban office, retail and entertainment concentrations, has become a prime concern in European metropolitan areas. This book provides a cross-national comparative perspective on employment deconcentration within selected metropolitan areas in Europe. Whereas most debate over urban sprawl and deconcentration is oriented towards the North American context, this book aims at a better understanding of this phenomenon in the European context, emphasizing the location of economic activities rather than residential patterns. It  provides insights on whether different governance attributes produce particular forms of deconcentration versus the influence of market attributes and local specificities, also commenting on quality of life impacts and possible governance and policy implications of the deconcentration process.

Introduction of a comparative framework is followed by eight case study chapters, three representing northern Europe, three the southern European-Mediterranean region and two post-communist central Europe. Most chapters examine two metropolitan areas, usually a large one and a smaller one. The comparison reveals considerable variations in the magnitude, form, and process of employment deconcentration, only partly in line with expected influences of governance systems. Evidence does not fully confirm an anticipated distinction between Northern and Mediterranean Europe; the Czech Republic and Israel seem to diverge most from prevailing European trends.