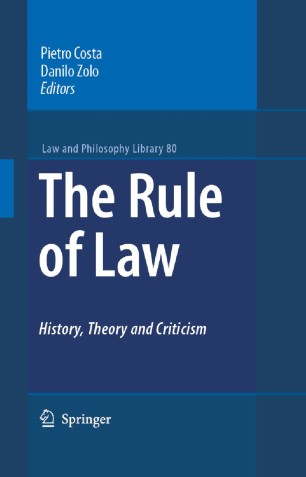 The Rule of Law History, Theory and Criticism

Costa and Zolo share the conviction that a proper understanding of the rule of law today requires referring to a global problematic horizon. It seems unavoidable to investigate into the relationship between Europe and the United States, on the one hand, and the ‘rest’ of the world, on the other. Over the last centuries this relationship developed in terms of conquest and colonisation, on the widespread view that Western ‘civilisation’ should be opposed as a whole to ‘barbaric’ others. Today, however, the notion of rule of law is still rousing a debate that cannot be said to have come to an end. The reason is quite simple: if the origins of the rule of law are in ‘Western’ societies and cultures, and if until recently the West took the lion’s share in the debate on our subject matter, it remains true that today other societies and other cultures take an active and creative part into a sustained philosophical-political debate. This is by no means a merely intellectual or academic question: the Arab-Islamic world, India, China, are not far away planets whose orbits never crossed the European and American West. On the contrary, in fairly recent times the encounters have been close and traumatic.

In sum, the book intends to offer some relevant guides for orienting the reader through a political and legal debate where the rule of law (and the doctrine of ‘human rights’) is a concept both controversial and significant at the national and international levels.