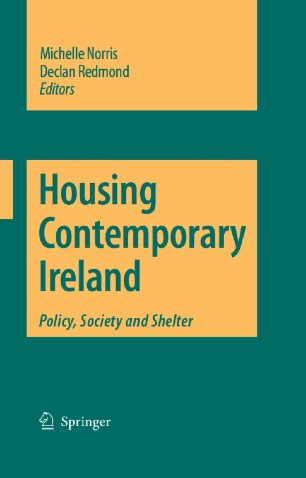 The period since the mid-1990s is distinguished by radical change in the housing sector in Ireland. During this time, house prices rose at an unprecedented rate. Between 1993 and 2003 the average price of a new house in the State increased by 220 percent. Private rents also grew and waiting lists for social housing lengthened. At the same time, new house building increased rapidly to one of the highest rates in the European Union. This development transformed city centres and suburbs, and also provincial towns and the countryside, which saw unprecedented construction of holiday homes and estates for commuters working in urban areas.

This book, the first comprehensive review of housing in Ireland for many years, introduces, in an accessible manner, the key housing developments since the foundation of the State and also reports on the findings of the latest research on the transformation of the sector in the past decade. The issues examined here include:

-the impact of the house price boom on wealth and affordability

-the management of social housing

-the accommodation of Travellers and homeless people

During the past decade, Ireland’s economic growth has attracted international attention. This book analyses the consequences of that growth on housing and serves as a primer to other countries on the complexities of delivering sustainable housing solutions in the face of economic success.

As such, this book will be of interest to students, practitioners and policy-makers involved in the housing field worldwide and to anyone who wishes to learn more about the causes and effects of Ireland’s recent housing boom.

Michelle Norris is a lecturer in the School of Applied Social Science at University College Dublin. She has research interests in housing and social policy and has published widely on issues such as regeneration, mixed tenure, housing and planning and social housing. Prior to taking her post in UCD she was the Director of the Centre for Housing Research, which is the national institute for research and training in housing.

Declan Redmond is a lecturer in the School of Geography, Planning and Environmental Policy and is currently the Deputy Head of the School. He has research interests in social housing policy, affordability, urban planning and regional development. He is currently involved in a number research projects on social housing regeneration, housing affordability and regional development. He was on the board of one of Irelands largest housing associations for nearly a decade.