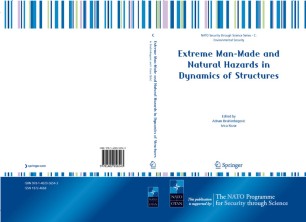 Extreme Man-Made and Natural Hazards in Dynamics of Structures

There is currently ever pressing need to provide a critical assessment of the current knowledge and indicate new challenges which are brought by the present time in fighting the man-made and natural hazards in transient analysis of structures. The latter concerns both the permanently fixed structures, such as those built to protect the people and/or sensitive storage material (e. g. military installations) or the special structures found in transportation systems (e. g. bridges, tunnels), and the moving structures (such as trains, plains, ships or cars). The present threat of the terrorist attacks or accidental explosions, the climate change which brings strong stormy winds or yet the destructive earthquake motion that occurs in previously inactive regions or brings about tsunamis, are a few examples of the kind of applications we seek to address in this work. The common ground for all the problems of this kind from the viewpoint of structural integrity, which also justifies putting them on the same basis and addressing them within the same context, is their sudden appearance, their transient nature and the need to evaluate the consequence for a high level of uncertainty in quantifying the cause. The problems of such diversity cannot be placed within a single traditional scientific discipline, but they call for the expertise in probability theory for quantifying the cause, interaction problems for better understanding the physical nature of the problems, as well as modeling and computational techniques for improving the representation of inelastic behavior mechanisms and providing the optimal design.