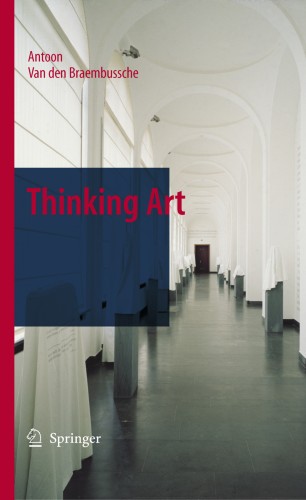 An Introduction to Philosophy of Art

In the twentieth century, avant-garde movements have pushed the concept of art far beyond its traditional boundaries. In this dynamical process of constant renewal the prestige of thinking about art as a legitimizing practice has come to the fore. So it is hardly surprising that the past decades have been characterized by a revival or even breakthrough of philosophy of art as a discipline. However, the majority of books on aesthetics fail to combine a systematical philosophical discourse with a real exploration of art practice.

Thinking Art attempts to deal with this traditional shortcoming. It is indeed not only an easily accessible and systematic account of the classical, modern and postmodern theories of art, but also concludes each chapter with an artist’s studio in which the practical relevance of the discussed theory is amply demonstrated by concrete examples. Moreover, each chapter ends with a section on further reading, in which all relevant literature is discussed in detail.

Thinking Art provides its readers with a theoretical framework that can be used to think about art from a variety of perspectives. More particularly it shows how a fruitful cross-fertilization between theory and practice can be created. This book can be used as a handbook within departments of philosophy, history of art, media and cultural studies, cultural history and, of course, within art academies. Though the book explores theories of art from Plato to Derrida it does not presuppose any acquaintance with philosophy from its readers. It can thus be read also by artists, art critics, museum directors and anyone interested in the meaning of art.