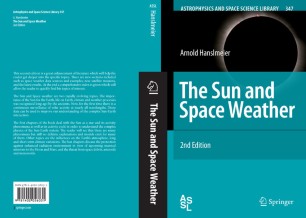 THE SUN AND SPACE WEATHER

This second edition is a great enhancement of literature which will help the reader get deeper into the specific topics. There are new sections included such as space weather data sources and examples, new satellite missions, and the latest results. At the end a comprehensive index is given which will allow the reader to quickly find his topics of interest.

The Sun and Space weather are two rapidly evolving topics. The importance of the Sun for the Earth, life on Earth, climate and weather processes was recognized long ago by the ancients. Now, for the first time there is a continuous surveillance of solar activity at nearly all wavelengths. These data can be used to improve our understanding of the complex Sun-Earth interaction.

The first chapters of the book deal with the Sun as a star and its activity phenomena as well as its activity cycle in order to understand the complex physics of the Sun-Earth system. The reader will see that there are many phenomena but still no definite explanations and models exist for many of them. Other topics are the influences on the Earth’s atmosphere, long and short term climate variations. The last chapters discuss the protection against enhanced radiation environment in view of upcoming manned missions to the Moon and Mars, and the threat from space debris, asteroids and meteoroids.

Since the field is quite interdisciplinary, the book will be of interest to scientists working in different fields such as solar physics, geophysics, and space physics.