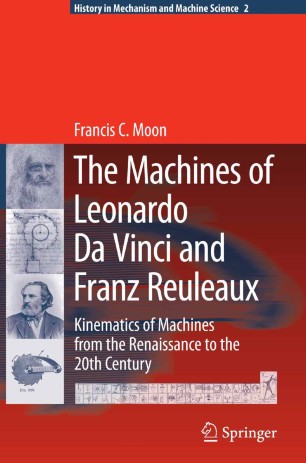 The Machines of Leonardo da Vinci and Franz Reuleaux

Kinematics of Machines from the Renaissance to the 20th Century

Part of the History of Mechanism and Machine Science book series (HMMS, volume 2)

Ah the Machine; both coveted and criticized, life sustaining and life destr- ing yet always a symbol of human creativity and invention from the Rena- sance to robotics from the Wright brothers to the Wankel engine. There are more than a billion mechanical machines in our world of six billion humans. These machines are the source of both marvel and mayhem in the life of our planet. This book is about the evolution of these machines and the inv- tors and engineers who created them from the early Renaissance to the early 20th century. I have chosen two personalities who are icons of these two machine ages, Leonardo da Vinci [1452–1519] and Franz Reuleaux [1829– 1905], recognizing both the cadre of machine designers who in?uenced them as well as those who were in?uenced by the accomplishments of these two engineers. A major thesis of this book is that the evolution of machine design methodology, from the intuitive methods of the workshop to the math-based, engineering science analysis and synthesis of modern industrial design, was of equal achievement as the creation of the marvelous machines themselves. In the past two decades there has been increasing interest in rational me- ods of design from topology and optimization theories to genetic algorithms. In the teaching of design at the novitiate level, the importance of design - cles and iteration is emphasized. Yet often the historical background for e- lution of machine design is minimal or missing.