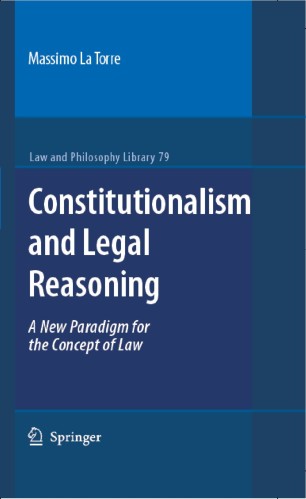 This is a search of a model for a humane law -- where the cruelty ban is still in force. This book however is not intended as an utopian enterprise; the humane law which is looked for is not for the future, nor is it meant as a reform project, or as a programme for new institutions to come. here the contention is that positive law is better understood, if it is not too easily equated with power, force, or command. Law -- it is shown -- is more a matter of discourse and deliberation, than of sheer decision or of power relations. Constitutionalism, legal argumentation, legal ethics -- three fundamental moments of our daily experience with the law -- are there to witness that this view may be right. Now a "constitutional" view of the law and its practice and the connected discoursive approach to legal reasoning can offer interesting solutions also to legal ethics. If we take legal reasoning seriously, and conceive it in a "liberal" way comprising both lawyers and judges, so that adjudication is both a task for advocates and judges, the requirement of separation of powers on the one side is already full of implications for lawyers' deontology: the role of a lawyer will not be allowed to encroach with the one fulfilled by the statesman. On the other side, the claim of rightness intrinsic in legal discourse cannot avoided by lawyers. So that they could no longer be seen as defenders of clients' interestes, but of their rights. And rights are claims to be right.. Thus the requirement of justice, or better a certain threshold imposed on the tolerable injustice of the legal claim raised, will be unescapable not only for the judge, but to the lawyer as well. The general idea of this book may unfortunately run counter recent developments in the international arena and more generally in the less palpable Zeitgeist. It might well be that, like Hegel's owl that takes flight at sunset, a conceptual pattern is set forth while the corresponding institutional practice is beginning to die out.